Hazah I'm Mike the Knight and I'll do it right!" Says Damien at least twenty times a day. He is hooked on Mike the Knight, so much so, that I am forever on all fours being ridden like Galahad.

My little man is very obsessed with all things knightly, he has his sword, helmet and shield but also wants a bow and arrow and a fold up bed just like Mike has (we have stuck shields to his bed but he isn't too impressed with this DIY effort!)

As my little man doesn't sleep well, I once told him that Mike was coming for a sleepover but wouldn't arrive until he was asleep. He was extremely excited and put out his helmet on his bed ready for Mike to borrow. He kept on about it so much, that I ended up feeling really guilty. So, after his bath I pretended to take a phone call and tell Damien that it was Mike's mummy and he was too busy doing knightly things so he couldn't make it. He was devastated, bad, bad mummy

When the opportunity came up to review the new Mike the Knight DVD, I just knew we had to do it. You should have seen his face when the parcel from Glendragon arrived.

Off we trotted to the DVD player and his excitement was uncontainable, I have never seen him sit so still for such a long period of time. Of course, with Damien being Damien it meant we couldn't start watching it until he had donned his entire knights outfit. He is gutted that he only has a grey knight helmet and not a blue one like Mike. Yes, it's on his birthday list.

For those of you who aren't yet fans, Here's a quick low down on what to expect. Young knights in training will be transported to the magical realm of Glendragon as Mike takes on challenging missions in an enchanted land filled with castles, dragons and magic.

In his latest adventures, his trusty horse and best friend Galahad comes to the fore. Mike wants him to be the best knightly horse but soon realises he is perfect just the way his is!

Mike is determined to become a great and noble knight like his dad and is joined on his missions by his friends, Squirt and Sparkie - the dragons, his sister Evie and obviously his horse Galahad.

I can't recommend this DVD enough to anyone with preschool age children. It's a great watch and very inspiring for role play and little imaginations.

We received the DVD for free but no payment was received for this post. All views and words are my own. 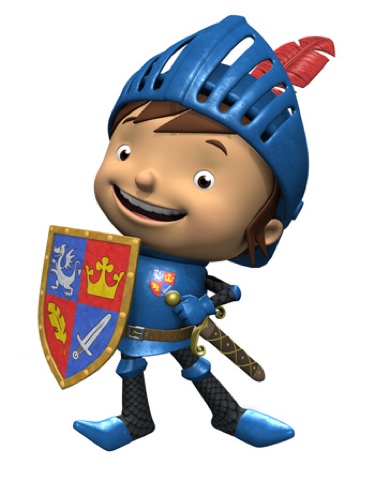 Posted by The Milkshake Mummy at 10:59