Where's me keys, a where's me phone?

On the 1st of January my top new year's resolution was to become more organised and stop losing my car keys, phone and bank card. Well, I've spectacularly failed on that! I've lost my bank card three times, that's once a month, it last appeared in the fridge. And I pretty much misplace either my keys or my phone on a daily basis.


Normally I lose my keys in the house, either I put them somewhere or one of my lovely children decide to hide them for me. Yesterday though, I lost my keys at the soft play centre. What a sodding nightmare that was.

After getting the boys togged up ready to leave, that itself is a major mission, I discovered my car keys were no longer in my bag. After several times of emptying the entire contents of said bag on the floor, reality kicked in and I looked at the ball pit, it looked back at me, and I thought about the ridiculous task ahead. It's me against the balls, with a three year old and a one year old as my allies.

Well boys, you were a great help, if you call beating each other up and running off whilst mummy was neck deep in plastic balls helping.

After calling in some more adult assistants, 40 minutes later the search was called off. One clever person, who obviously wasn't as frazzled as me decided to ask reception if any keys had been handed in. Genius! Then like magic my car keys appeared, yes someone had taken them and places them with reception.

I'm think I'm destined to a life of losing things, my womb is not a tracking device and my boobs are not crystal balls that can see where things are. Fact! 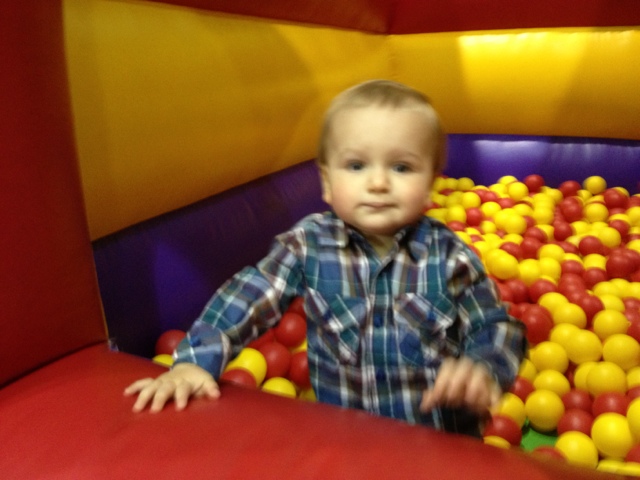 Posted by The Milkshake Mummy at 23:11