Controlled Crying - Round One Mummy

Tonight, is the first night of our new routine. Having only had three hours sleep each night since Thursday, I had to do something.

Although, I've said I hate it in the past, I decided I have to give control crying a go. I was at breaking point, exhausted mummy and exhausted children is not a good combination. My two have always been bad sleepers, but recently it's got totally out of hand. And that is my fault for letting it get so bad.

So tonight went as follows, bath, pjs, milk and story. Then I tackled Charlie aka Dennis. I've been rocking him off to sleep in his buggy for the past six months and it had to change.

It was awful, listening to him wailing mummy in desperation and frustration and coughing away. I went in every ten minutes and each time I left the room I felt awful. I had to keep in mind why I was doing it, and that is so we all get some sleep in the long run.

Charlie took 50 minutes before he settled.

Next up was Jake aka Damien. I am following the Supernanny 'back to bed' tactic with him. But to my surprise he didn't get out of bed.

Now Jake being Jake didn't make it easy for mummy either. He cried for me for a good 50 minutes too.

In fairness, this was slightly easier to take as he is three and can communicate his feelings.

So, all in all, I would say round one goes to mummy. But let's see who takes round two. I know it can't be that easy.

I'll keep you all updated on how our sleep training progresses this week. 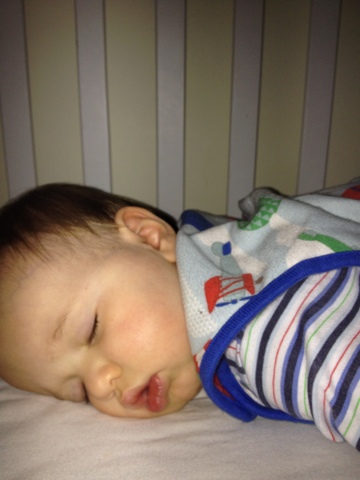 Posted by The Milkshake Mummy at 11:48