I can't get no sleep!

To us parents whose babies don't sleep, the term 'slept like a baby' is a bitter sentence to swallow. For us sleep deprived parents it often means being woken up several times a night and daytime naps are a continual battle.

Our current sleeping situation is as follows. During the day we take our usual drive around 11am, we take the same route everyday and quite often pass my friend who does the same journey in reverse. If I am really lucky, they may give me an hour but sometimes it's ten minutes.

At night my toddler goes to sleep in our bed, after pleading with him for up to an hour to go to sleep. During this time he climbs all over you, whilst you lay there pretending to be asleep. My 11 month old is currently rocked to sleep in his buggy and then carefully placed in his cot once he is in a deep sleep.

When we go to bed, we move Damien back into his own bed and that lasts around five minutes. He then ends up in our bed for the duration of the night in a star fish position. Dennis on the other hand wakes frequently and is put in his buggy and rocked off! Hmm, what would Supernanny say about that?

One of the problems is that Dennis is such a light sleeper. He would literally wake up to the sound of a pin dropping. I try to be super stealth like but somethings are beyond my control:

1: after the sleep run and the holy grail of both boys being asleep you can almost count on the following.
A - A window cleaner will park his van behind us and make the most almighty rackety.
B - A car will arrive to pick up a neighbour and will beep the horn to signal it's arrival rather than getting out. Or get out and proceed to talk at the top of their voice right outside the window.
C - I will get out of the car and shut the door a fraction too hard.
D - Be pulling up outside the house and my mobile phone will ring. As its connected to the Bluetooth it will come blaring out of the radio.
E - I will undo my seat belt and that little click sound will wake them up.

It's not just the day naps though but any noise at night time is an automatic alarm clock. These are just a few of the latest wake up incidents.
1. You can guarantee I will trip over a toy on the way out of the bedroom. Not a soft teddy, but a massive plastic thing that will not have been switched off and starts playing some hideously loud music!
2. Find the creakiest part of the floor board and walk directly over it.
3. Need a wee and have to go resulting in lights and chain flushing. Although I am now a firm believer in if its brown flush it down, if its yellow let it mellow.
4. Pull the duvet covers on just a bit too loudly.
5. Wake up Damien who will in turn wake up Dennis. The result = watching Baby TV at 3am downstairs.

Think about it, next time the phrase slept like a baby just rolls off the tongue. 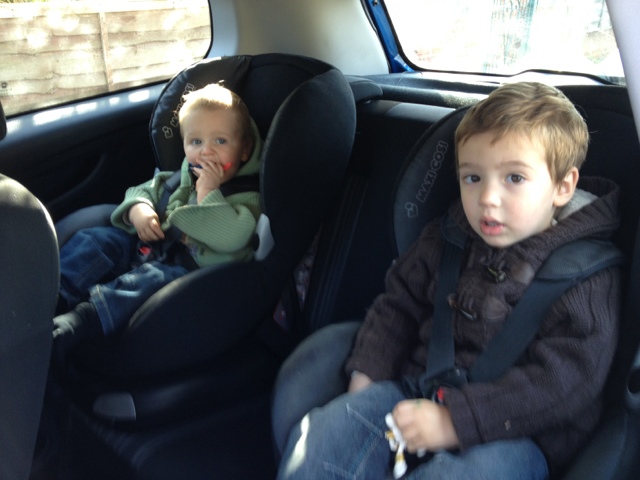 Posted by The Milkshake Mummy at 12:23