Just another day in paradise

So I have been off the blog for a few days as my boys have been a little on the crazy side and I have had to work, host my lovely inlaws to be and generally run around like a loon!

Let me take you back to where it all went wrong. Picture the scene, peaceful nights sleep, yeah right, interrupted by Dennis after his boob fix at 2am, he is a little bit like a junky on crack - addicted! Thinking I could feed him off to sleep and get back to my snooze is always my downfall. I silently tip toe over to the cot with him snuggled in and gently lay him down, within seconds he is awake and I know it's going to be a long night.

Up he gets again and guess who should appear at his door bang on cue, Damien! He has already decided that only mummy will do and I must sleep in his bed. Only problem I can't be in two places at once. Finally two hours later I put Dennis back to bed and he stays there. Phew. I sink into bed, turn out the light and think about how nice it will be to sleep. 'Think' being the operative word, "I want my mummy" came the cry from Damien's room, with that he was up and out of his door, ran into my bedroom, misjudged where the bed was and 'Crack' followed by an all mighty scream.

Up I jump and grab him, blood everywhere I take a look at his chin and think its going to need a stitch. Thankfully after cleaning it up, providing milk and galaxy minstrels he settles and the blood stops. It's now 5am and we are all wide awake on the sofa watching Peppa Pig and that was the end of sleep. Being awake since 2am did not bode well for the day ahead.

I had work in the morning so Nannie Plum took both boys to playgroup! Damien apparently terrorised the life out of the other children and Nannie Plum came home looking like she had been dragged through a hedge backwards! I was nice to give her all the excuses she gives me when I say he has been naughty. She said on a couple of occasions she found herself shouting: "Damien noooooooooooo' at full volume across the room! And they were all glad to see my boys leave. Dennis also managed to steal a toy!

Following bed gate, we decided to bite the bullet and go bed shopping on the Saturday morning and buy something more child friendly! Good god, that was not an easy task! Firstly, our current bed is so uncomfortable and as most of you know I don't get a great deal of sleep anyway, so when I lie on the first bed I don't think I am ever going to get up. I could have slept there and then. Secondly, my terrorist child had great fun trying out all the beds too, just in a less conventional way than an adult as he opted for the bounce test! This involved jumping as high as possible and shouting at the top of his lungs!

Daddy pig escaped to the pub to watch the footie on Saturday afternoon so I roped in nanny plum again to help out. Both boys were as good as gold! Damien even went to the toilet on the potty! My child can't do anything normally mind you. He never goes on the potty despite my best efforts. Yet on this occasion, he picks up the potty, takes it into the front garden, takes off his trousers and nappy and has a wee in full view of the street! Exhibitionist! Very proud mummy moment nonetheless!

As we had daddy pig's mum coming for the day, operation tidy up was in full swing on Sunday morning. Daddy pig took the job of 'tidyuperer' and I took both boys to tesco to do the weekly food shop! Dear god, I felt like I had climbed Mount Everest after that, lots of sympathetic looks were cast my way though as Dennis point blank refused to sit in the trolley until the end and I had to push the trolley with one hand and carry my 20lb baby in the other! Never ever again...... 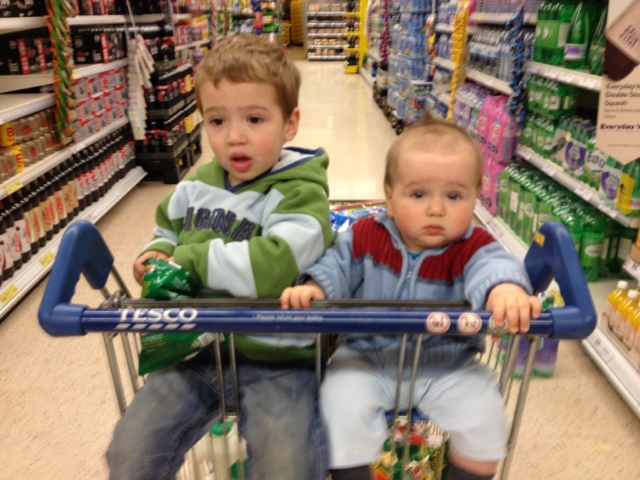 Posted by The Milkshake Mummy at 00:12