My son the fireman

Not content with being called fireman Sam, Damien has decided he wants to be called fireman Tom, no idea where he has got that from. He has become obsessed with anything to do with fire, you name it he wants it!

One of the problems I have with this is that he shouts 'FIRE' really loudly when out in public. This causes people to slightly panic, similar situation I guess to shouting bomb on a plane. This morning there has been a fire at our house, jolly babies and the worst yet , the doctor waiting room!

He has also developed a love of sliding down the fire pole. The problem with this is that we don't actually have a fireman's pole at home. Therefore, he has created his own. Let me give you a few examples;

I expect you can see where I am going with this, yep he will slide down anything.

He has also taken to wearing a red fireman hat everywhere we go! I can sometimes persuade him to leave it in the car but only with a bribe. Usually sweets.

Perhaps he has already decided what he wants to do when he is older. 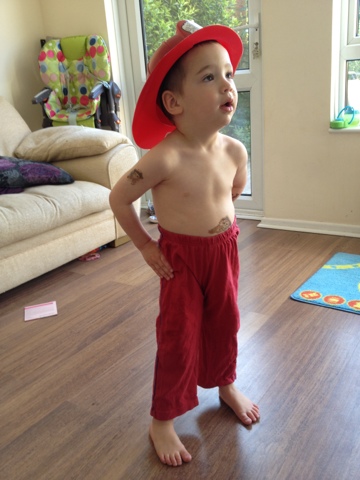 Posted by The Milkshake Mummy at 04:32